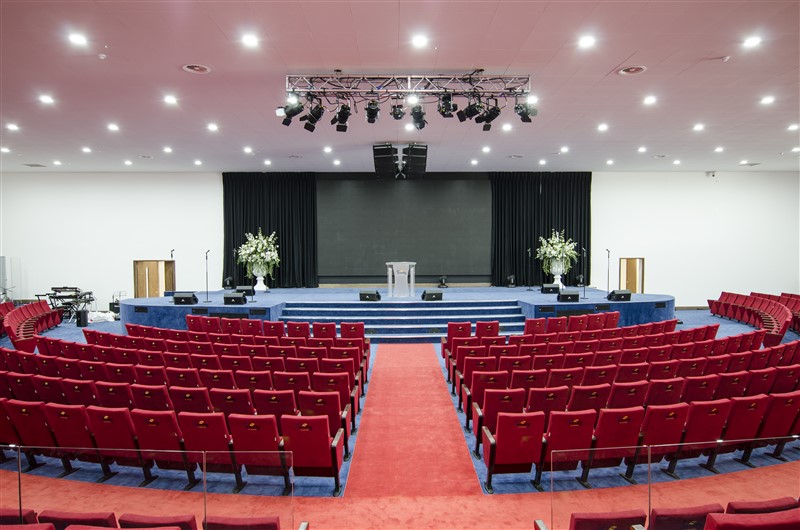 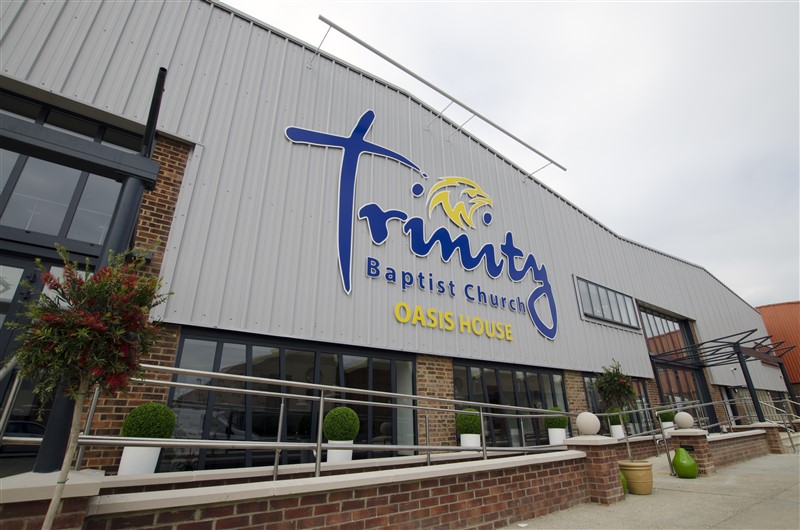 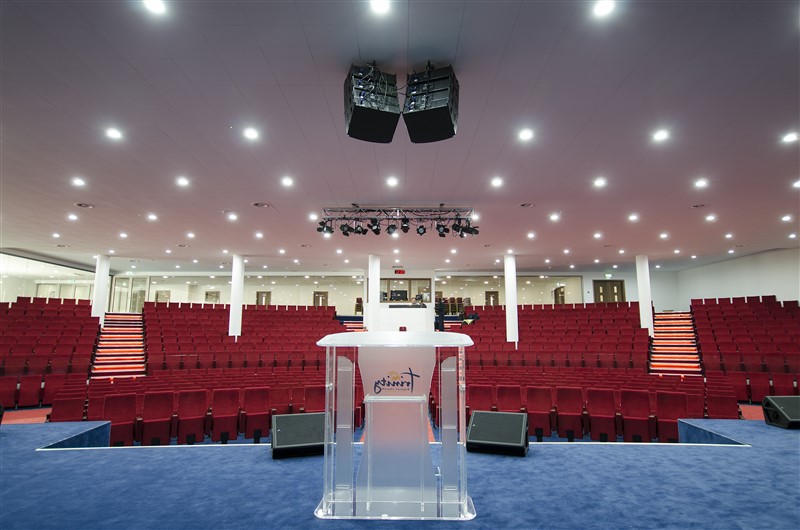 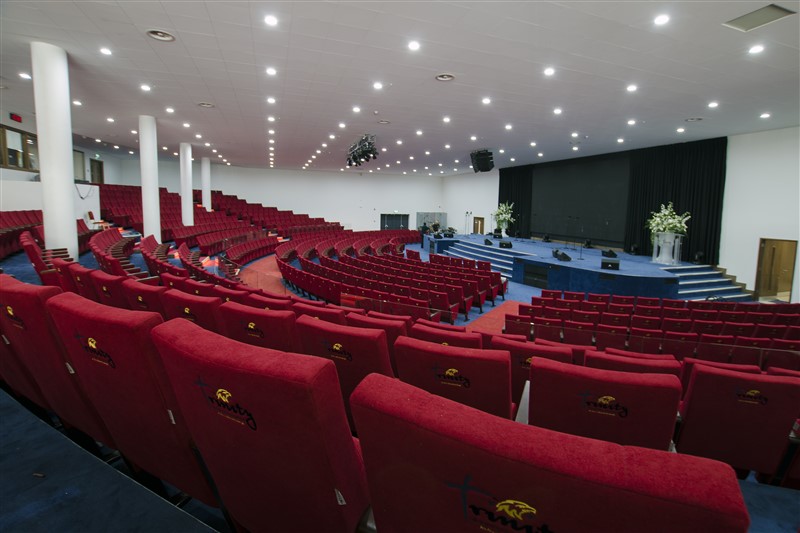 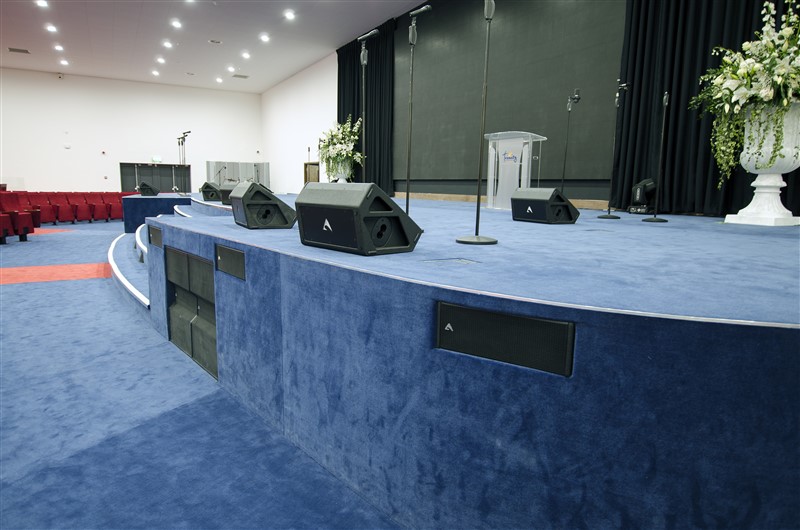 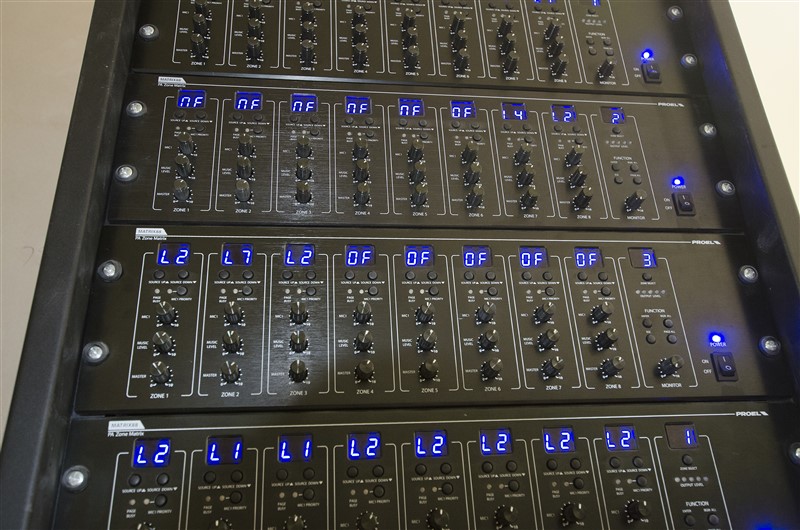 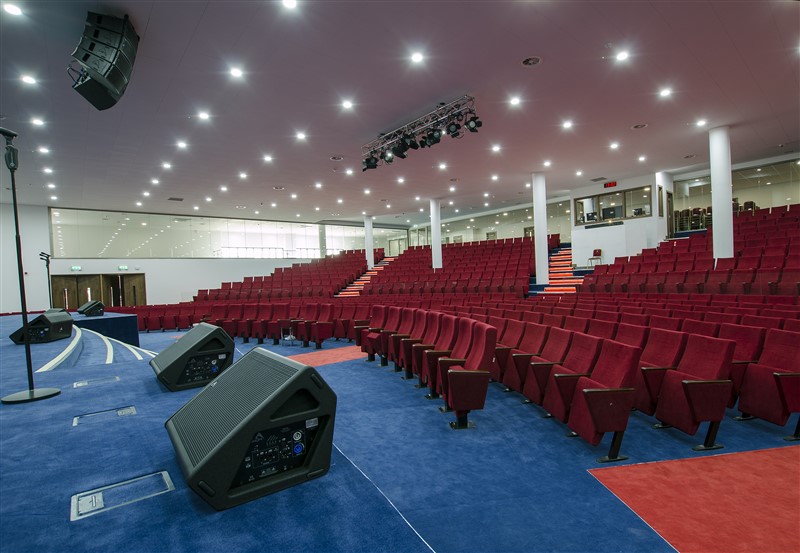 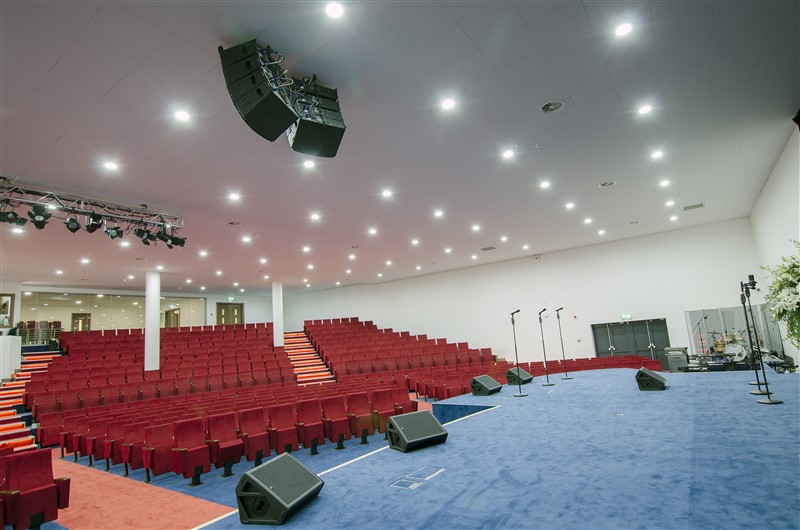 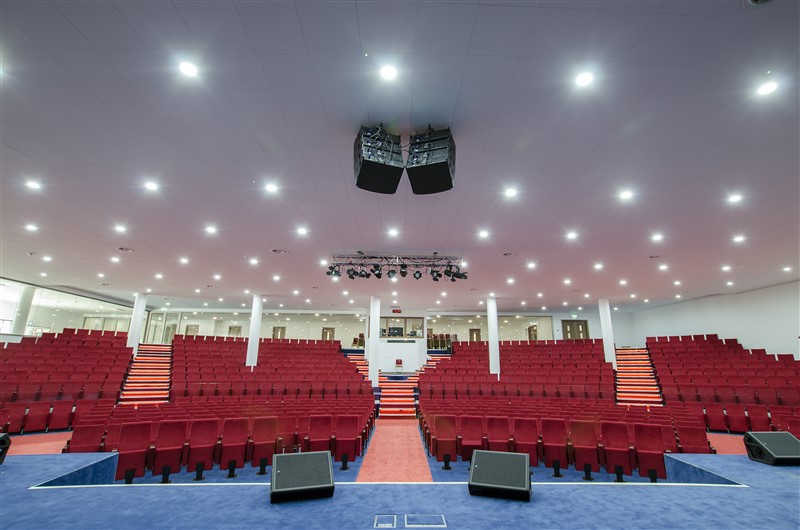 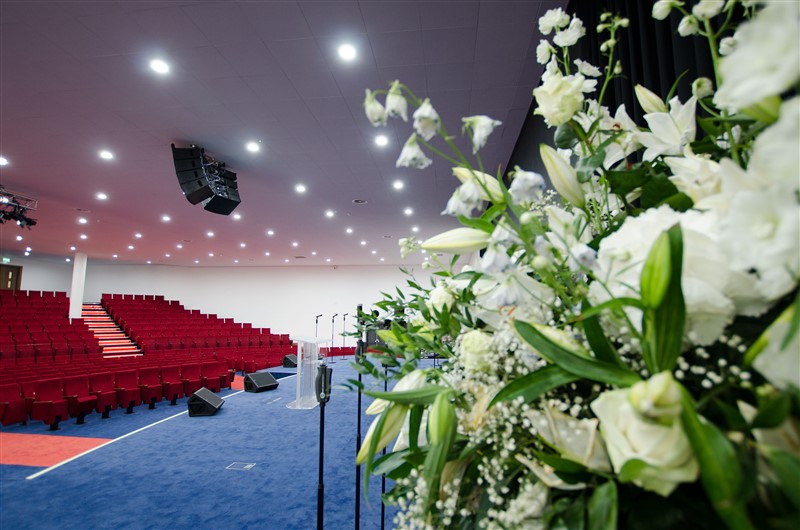 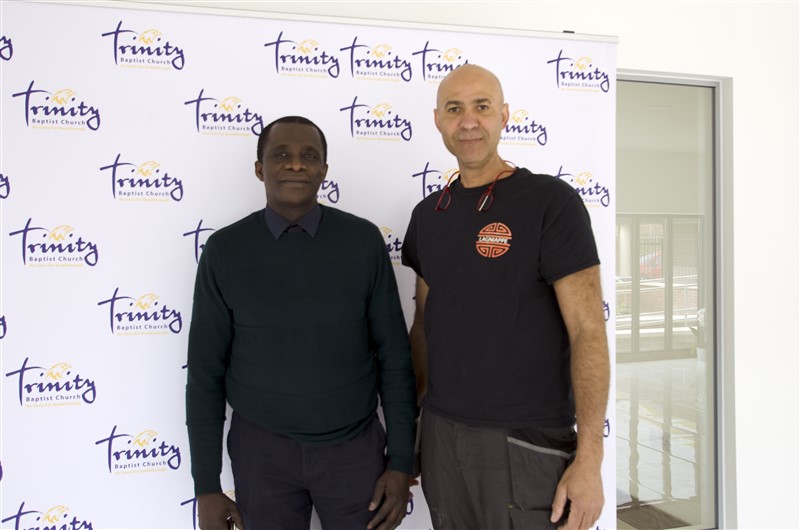 Trinity Baptist Church, originally founded by Pastor Kingsley Appiagyei in 1990 in London, has grown over several years to encompass 12 churches, including seven in London, as well as in Italy, Norway, Denmark, and Ghana, with the number of followers worldwide now reaching several thousand.

Oasis House is the latest new-build Trinity Baptist church situated in Croydon. Converted from a large empty warehouse, the ultra-modern complex encompasses a 900-capacity auditorium and main worship space, a sports hall, a café, numerous meeting and training rooms, and childrens’ play areas – and all are equipped with state-of-the-art audio and video communications systems.

The project has been patiently developed over a period of around seven years. In 2009 Senior Pastor Appiagyei had a vision for a new, larger church and looked around for a suitable location. When the Croydon building became available he saw the opportunity to bring more people in, especially young people, and began to put in place all that was needed to transform the cavernous warehouse into a church.

The church initially approached Proel International to discuss the design of a distributed sound solution, and while there former Proel International MD Paolo Burocchi treated them to a demonstration of an Axiom compact line array. They were impressed, and subsequently submitted building plans to the design team at Proel’s headquarters in Sant’Omero, Italy, for advice on putting together a sound system for the main auditorium.

Proel’s export sales engineer Daniele Massaccesi prepared an EASE simulation and opted for a classic centre cluster arrangement with delayed front fills and floor-mounted subwoofers under the stage. “The shape of the room and the raked seating layout immediately suggested that a single centrally placed source would work well, providing a stable image and optimal arrival times for the whole audience,” he said. “A stereo configuration didn’t really make sense since they wanted the choir setup to be flexible and the band is located on the floor at the left of the stage. The room has non-symmetrically placed round pillars, but didn’t really cause any problems with reflections. The main challenge was getting good coverage for the first few rows of seats, but we solved that well with a distributed solution of near field front fills built into the stage and step risers.”

Paolo Burocchi put the church in touch with an installation company he had worked with before. Originally from Trinidad, Lagniappe (a Creole word from the Caribbean meaning ‘a little bit extra’) had been a Proel customer for many years, and had also done work for the church – providing monitors, cabling, configuring audio desks and so on – and were the ideal choice as overall system integrator for the project given their considerable experience in systems networking. Their quote, amongst others from London-based installers, was duly accepted and head sound engineer Roddy Maharaj began the work of mapping out the church’s technical requirements.

“We began in earnest with the first fix in April last year after modifying the spec slightly to accommodate some changes that they wanted,” he explained. “The stage was enlarged so we needed to add one more front fill on each side, and the band position was relocated to the side of the room on the floor to allow for more flexibility for the choir on stage. We also discussed the possibility of left/right PA hangs instead of a centre hang so we went ahead and provided both options with steels in the roof at three positions.”

The sound system for the main auditorium is based on Axiom AX2065P compact passive line arrays, a dual 6.5-inch two-way model with 110° horizontal coverage, and hung in two columns of four cabinets over the centre of the stage to cover the entire auditorium. These are supplemented with two pairs of SW215P dual 15-inch subwoofers located under the stage at left and right. ED23P passive dual 3.5-inch front fills are built into the risers of the central steps, and ED25P passive dual 5-inch front fills are fitted into the wrap-around wings of the wide stage. Ten CX15A powered co-axial stage monitors can be cabled into any of 16 stage concealed stage box positions. At front of house, a Cadac CDC eight-32 full frame digital live sound console with dual 24-inch touch screens and 32 input faders mixes the 16 onstage mic channels and the multiple feeds from the live band at the side of the stage.

The distributed audio system has expanded to become a complex configuration that covers the entire building. “We started off with an eight-zone system, and realised very quickly that they needed a lot more, and actually we have ended up with a total of 32 zones,” said Maharaj. The Proel communications system extends to cover a 300-capacity seating area behind glass at the rear of the main auditorium where the audio can be relayed from the service; six first floor training rooms; nine ground floor training rooms; a crèche; children’s play rooms; a café; the 500-capacity sports hall; the pastors’ main suites and training rooms; the pastors’ reception rooms; and the main lobby. Four MATRIX88 units form the heart of the system – centrally racked up alongside a SOURCE CD/MP3/FM tuner, an AMIX63 nine-channel mixer, five AUP4125S four-channel amplifiers, and four AUP4250S four-channel amplifiers.

“The zoning allows for eight line inputs that you can choose from each of the rooms, and it also allows for a local input from each training room,” said Maharaj, “so as a training room does a presentation with a laptop on the main screen, they can send the signal through the matrix, which will then amplify it and send it back to the speakers in that room. Each room is controlled from that zone, so you can manage the zones individually or you can manage them from the matrix, which makes it very simple. A mic input is provided on the reception desk, so that main reception can page any one of the 32 zones individually, or page the entire building, and in each zone they can also connect their own local mic or CD player.”

Proel ceiling speakers feature prominently throughout the installation. XE51CT 5-inch full range models are used for the majority of the small training rooms and the main lobby area, and for the café and the auditorium’s overspill areas upstairs CS30HFT 6.5-inch two-way ceiling speakers provide wider frequency response and higher output to reflect the energy of the musical content of a service.

Joseph Arthur is the chief sound engineer at Oasis House. “When Paolo showed us the Axiom line array and we listened to it, we knew straight away that was what we wanted,” he said. “The sound was very clear, and we thought it would be very suitable for our musically-orientated services. Now that the system is installed and commissioned – the guys came down from Italy to set up the software and fine tune it – the clarity of speech is excellent, everyone can hear clearly and there is more than enough bass for the live music program.

“For a modestly sized system it’s certainly loud enough, and it reaches easily up to the back of the main room. We are extremely pleased with the result, and we are already looking at developing further projects both here in London and abroad.”