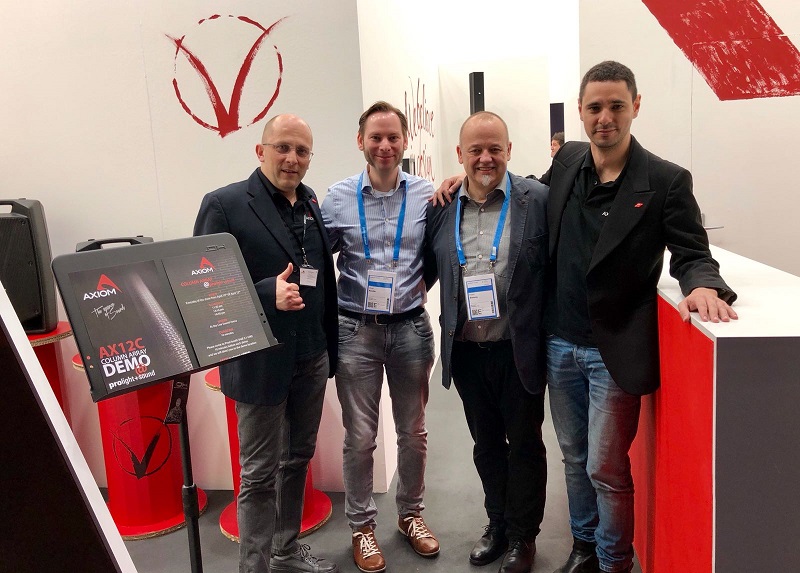 Axiom Pro Audio has appointed IAD GmbH as the official distributor for parent company Proel's Italian professional loudspeaker brand in Germany. The announcement coincided with the participation of Axiom at the Live Sound Arena at the recent Prolight+Sound trade fair in Frankfurt, marking the second time that the slim AX12C column array has demonstrated its exceptional capabilities against much larger speaker systems.

Founded in 2001 and based in Korschenbroich in the North Rhine-Westphalia region of Germany, IAD is part of IAG (International Audio Group), one of the biggest audio producers worldwide. The company fields a permanent staff of experienced audio professionals in its pro audio division as well as employing a team of freelancers.

IAD's Pro Audio Sales Manager Frank Swierzy had earmarked Axiom as a brand to look out for at last year's Prolight+Sound. "I told my CEO to go and take a look at the Axiom AX12C columns that were being demonstrated in the Live Sound Arena, and this was the beginning," he said. And this year again people were searching between tons of line arrays to find where this amazing sound is coming from. They didn't want to believe that these small columns were able to fill this huge place with crystal clear sound."

At PL+S this year Axiom's Chinese distributor Sanecore (also part of IAG) won the Best Distributor of the Year award, and now with the IAD appointment the cooperation with IAG grows every stronger. "Honestly, one year ago I never imagined that we would become the German distributor," said Swierzy. "What we found in Axiom was convincing, innovative products, and people with passion for music and pro audio. This exactly complements our way of doing business, and we are sure that it's the beginning of another success story."

Axiom International Sales Manager Elio Caia commented: "We are very happy to be working with such a professional team as Frank and Sven at IAD – their skills, vision, and positive attitude will bring a great deal to this new cooperation in the German market, which will allow us to acheive great things together. We look forward to a successful long term relationship with IAD."